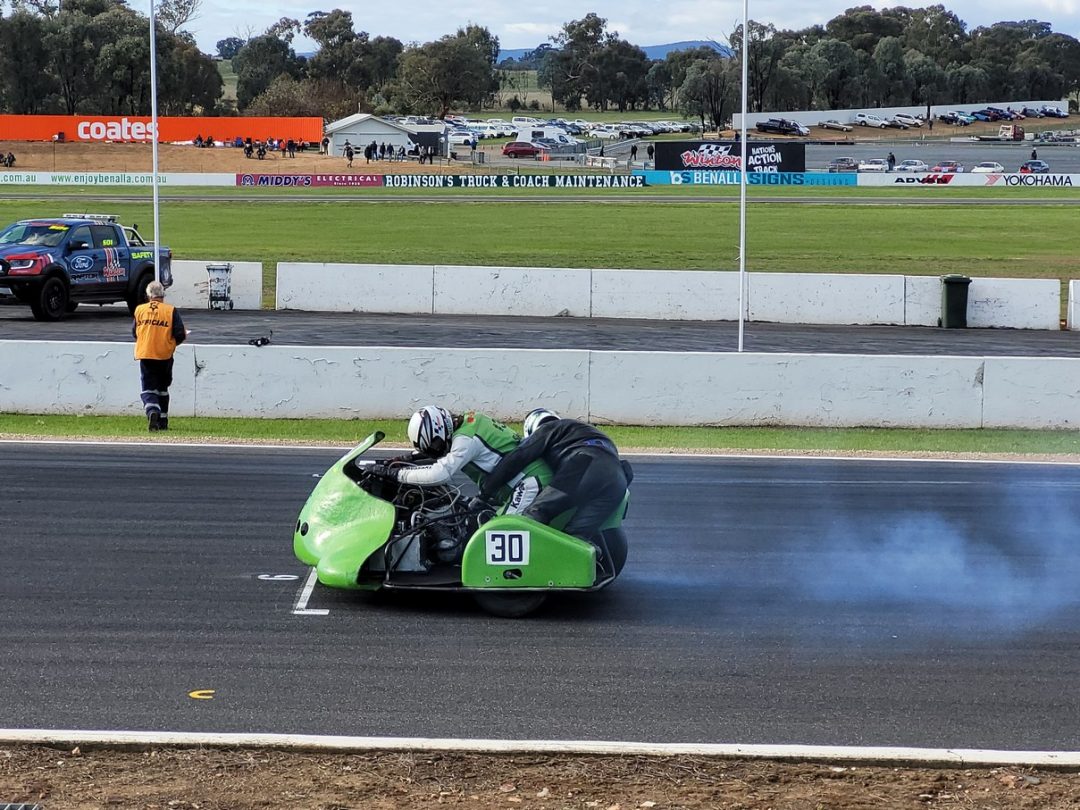 It’s not very often you can venture around the pits at a racing event but at Winton it was almost encouraged. Watch the preparations, chat to the drivers, drool over the machinery or like Baz and I did, try to answer each other’s random questions. Anything about the old Holden engines was his bag, any electrical doohickey was my jam. Anything else, well that was just a guess. Anyway, enjoy what was getting fine tuned and worked on at Historic Winton!

We saw both of these next cars on a ride back from Melbourne on Friday, instantly recognisable because they share the same bumper slogan: ‘Prepared by the very best of friends.’ Obviously their mateship covers race days as well!

Now just a quick note on these sidecar bikes – if you’ve never seen one in action, they’re quite the sight. Because while the main rider stays in place and makes sure they’re going the right way, the one in the sidecar moves all over the shop like an agile monkey to help with cornering. And as you can see with some of these bikes, some of the sidecars are nothing more than staging areas – hold on and try not to let go when you’re leaning into a corner!

This one gave me a real ‘made in Gumbaya Park’ vibe based on the old driving cars the kids could putt around in. They never sounded or looked as funky as this thing did though..

This bike was possibly fished out of a swamp and given a quick freshen up for race day. Love it!

I wasn’t even going to begin to try and what out what was involved in this thing but it sure did look like fun parked there!

The need to Graduate

This site uses Akismet to reduce spam. Learn how your comment data is processed.

Manage Cookie Consent
To provide the best experiences, we use technologies like cookies to store and/or access device information. Consenting to these technologies will allow us to process data such as browsing behavior or unique IDs on this site. Not consenting or withdrawing consent, may adversely affect certain features and functions.
Manage options Manage services Manage vendors Read more about these purposes
View preferences
{title} {title} {title}
%d bloggers like this: